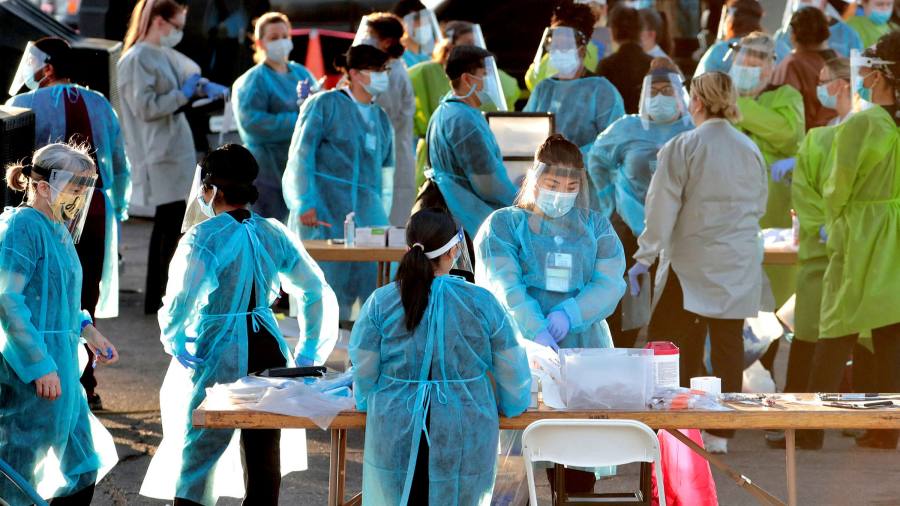 Arizona has become the latest state to put its economic reopening into reverse, announcing it would immediately close all bars, gyms and cinemas in the face of one of the worst outbreaks of new coronavirus cases in the US.

The executive order by Doug Ducey, governor, makes Arizona the third state in the US south and west to roll back its decisions to loosen lockdown measures, following Texas and Florida, which shuttered bars last week.

Mr Ducey said at a news conference in Phoenix that the closures would last for at least a month, expressing confidence that the state could resume its reopening by the end of July.

“We can pump the breaks in Arizona,” Mr Ducey said. “This is the time to act and save as many Arizona lives as possible.”

Mr Ducey’s decision, which includes a delay in opening state schools in August, came as infections in Arizona have spiked, with the total number of coronavirus cases doubling to 74,533 over the past two weeks. Mike Pence, vice-president, is due to visit Arizona on Tuesday as part of a fact-finding mission.

Mr Ducey denied he acted too quickly to reopen the economy amid criticisms from local medical officials that hospitals may soon be overwhelmed by new victims.

“No decision has been easy since we declared an emergency on March 11,” he said. “I have made what I believe in my heart of hearts is the best possible decision to protect peoples’ lives in Arizona and to protect livelihoods in our state.”

Although states in the south and west have seen the sharpest jumps in new cases, two of the hardest-hit states from the March outbreak in the north-east moved on Monday to pre-empt a second wave: New Jersey halted plans to allow indoor dining in restaurants and New York is weighing a similar pause.

Phil Murphy, the New Jersey governor, said indoor dining would be postponed “indefinitely”, and his New York counterpart Andrew Cuomo said he would decide this week whether to do the same for New York City, which was due to resume indoor service on July 6.

Mr Murphy said there was mounting evidence that a new wave of coronavirus cases in the US south and west were “driven by, in part, the return of indoor dining”.

Mr Cuomo said there was an “undeniable” lack of compliance with social distancing guidelines in bars and restaurants in New York City, and Mr Murphy said he had witnessed a “complete disregard for social distancing” and face coverings at eateries across New Jersey, which was due to loosen restrictions this week.

Although New York has sharply driven down what was once the US’s highest infection rate, Mr Cuomo has been adamant that he would reimpose restrictions if there were signs cases were beginning to rise again.

Several large companies have taken it upon themselves to halt or roll back reopening plans regardless of government guidance, including Apple, which closed retail stores again throughout the south and west.

On Monday AMC Theatres, the largest cinema chain in the US, said it would push back its reopening date for 450 of its venues by two weeks to the end of July.

“Our theatre general managers across the US started working full-time again today and are back in their theatres gearing up to get their buildings fully ready just a few weeks from now for movie-goers,” said Adam Aron, AMC’s chief executive.

Responses to the pandemic have become increasingly varied. Tennessee on Monday extended its state of emergency until August 29, effectively joining Arkansas, Louisiana, New Mexico and North Carolina, which last week paused their reopening plans, but some individual cities, such as San Francisco, have delayed plans to further ease lockdowns in the absence of a state-imposed pause.

Similarly, the governor of Kansas said that from July 3 all residents will be required to wear face coverings in public, joining the likes of California, Nevada and North Carolina that have introduced mask mandates over the past fortnight. Conversely, Brian Kemp, Georgia governor, has told reporters he had no plans to issue such an order despite a rising number of cases in his state.

Some cities have instituted mandates in the absence of state orders, with Jacksonville, Florida, the latest to take such action on Monday.

The outbreak has raised alarms outside the US, as well. The EU is expected to approve a new list of countries that can begin reopening travel with the 27-country bloc — a list that will not include the US for now.

The US reported a further 36,490 people tested positive for coronavirus between Sunday and Monday, according to the Covid Tracking Project. Since Friday’s record jump on more than 44,300 cases, the daily rate rose by more than 42,000 for three days in a row and pushed the national total since the pandemic began above 2.5m.

California, Florida and Texas are now averaging more than 5,000 cases a day, with Arizona, Georgia, North Carolina and South Carolina the other states that have average daily case rates in excess of 1,000.

Is It Going To Get Better Before It Gets Worse? Five Experts Share Predictions For The U.S. Housing Market In The Second Half Of 2020
5 ways to beat the stock market — from a fund manager who’s done this for years
Ep 147: Why Trading Small or Less Beats Trading Large
The muni market overall is set for more gains, but some bonds are riskier than they appear
Will the USD Hold Up as the Global Reserve Currency?